Don't attend the assassination party with just one throwing star! Be prepared and bring a shuriken set or two. Shuriken literally translates to "sword hidden in user's hand," and is a traditional Japanese concealed weapon. From hira shuriken to shaken and kurumaken ninja star sets and everything in between, All Ninja Gear will make sure you are a properly outfitted and prepared with the best ninja gear!  Most throwing star sets include a free carrying pouch too.

"If you want peace, prepare for war."
$24.99
View as Grid List
Sort by
Display per page 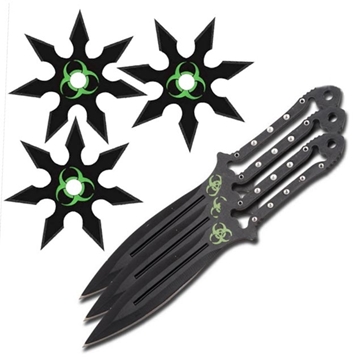 The perfect addition to your zombie survival arsenal!
$39.99